Yunoha Thrul (Aquarion Evol) can manipulate the transparency of anything, including herself.

"There is nothing wrong with your television. Do not attempt to adjust the picture. We are now controlling the transmission. We control the horizontal and the vertical. We can deluge you with a thousand channels or expand one single image to crystal clarity...and beyond."
― Control Voice (The Outer Limits)

The power to manipulate clarity, the opacity, translucency or transparency of an object. Sub-power of Light Manipulation. Not to be confused with Lucidity Manipulation. 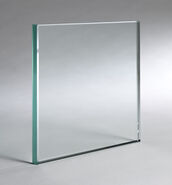 Users can manipulate the clarity of objects such as glass itself.
Add a photo to this gallery
Retrieved from "https://powerlisting.fandom.com/wiki/Clarity_Manipulation?oldid=1500562"
Community content is available under CC-BY-SA unless otherwise noted.