Use the traits of a classic monster.

The power to use the abilities of classic monster archetypes. Variation of Monster Physiology and Fictional Trope Physiology.

The user is or has the ability to take on the form of a classic monster. A monster that has become a long standing and iconic archetype in the horror genre and fiction in general. Monsters that are so recognized that they can be seen as a species of monster rather then a singular, unique entity or character.

Typically, this form of monster is defined by being closely affiliated with pop culture rather then mythology and folklore, but in some cases, monsters that are rooted in folklore have been given an identity in media and most representations of these monsters are derivative of their film counterparts, such as with vampires and Dracula.

Retro Classics - Monster archetypes that are long-standing classics in the horror genre and fiction in general.

New Age Classics - Monster archetypes that are more recent than Retro classics but have established themselves as reoccurring figures in pop culture.

The Anur System (Ben 10 series) is home to many alien lifeforms that embody classic monster tropes, such as the Ghost-like Ectonurites... 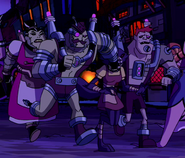 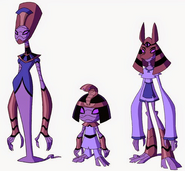 ..The mummy-like Thep Khufans and more!

The Creature Commandos (DC Comics) are a team of super soldiers that take the forms of many classic monster archetypes. 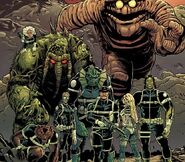 The Howling Commandos (Marvel) are a team of monsters trained to be soldiers and brought together by Nick Fury. 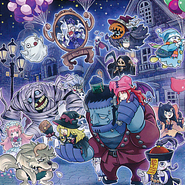 Ghosttrick Monsters (Yu-Gi-Oh!) are based on both classic western and Japanese monsters (yokai).

The cast of Darkstalkers (Darkstalkers) are based on many classic monster and folklore archetypes such as demons, werewolves, zombies and more.

The Monster League of Evil (DC Comics) is a team composed of the original classic monsters such as Dracula, Frankenstein’s Monster and more.

SCP-2846 The Squid and the Sailor (SCP Animation)
Community content is available under CC-BY-SA unless otherwise noted.