Clayface (DC Comics) can shape his clay body into a variety of weapons and constructs.

Create constructs made of clay.

The power to create tools, objects, weapons, armor, and even appendages out of clay. Sub-power of Clay Manipulation. Variation of Terrakinetic Constructs.

The user can turn clay into tools, objects, weapons and other items, create semi-living constructs and/or create structures/buildings of varying permanence. Users who have mastered this ability can use it for almost any situation, creating anything they need. 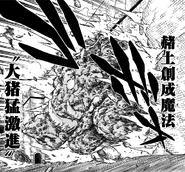 Deidara (Naruto)
Add a photo to this gallery
Retrieved from "https://powerlisting.fandom.com/wiki/Clay_Constructs?oldid=1433998"
Community content is available under CC-BY-SA unless otherwise noted.