Have a body made up of clay.

The power to transform into or have a physical body made up of clay. Technique of Clay Manipulation. Variation of Earth Mimicry.

The user is made up of or can transform their body completely into clay. A user's transformed form is anatomically identical to their normal form, aside of being made of clay, in which case it contains all to organs and is somewhat vulnerable to attacks. Alternately the user can transform into homogeneous matter, without any part of their form being more important than the other.

Users abilities depend on the level of moisture they contain: semi-solid clay can simply absorb most attacks and even enemies or items, it is malleable and nearly impossible to actually hurt; dry clay is nearly stone-like in hardness but fragile.

Clayface (DCAU) is made up of mud-like clay. 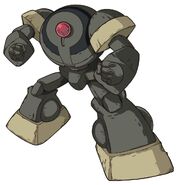 Elemental Hero Clayman (Yu-Gi-Oh)
Add a photo to this gallery
Retrieved from "https://powerlisting.fandom.com/wiki/Clay_Mimicry?oldid=1688277"
Community content is available under CC-BY-SA unless otherwise noted.