Jared Evan Grace (The Spiderwick Chronicles) was gifted The Sight from being spat by a Hobgoblin.

Perceive the glamour and illusions of paranormal activities through visual sight.

"I have given you The Sight. A gift that only a Hobgoblin...can bestow."
― Hogsqueal to Jared Grace (Spiderwick Chronicles)

"You can see me?"
"Yeah that's kind of the point. But you obviously didn't see me."
"You have The Sight?"
― Jace Herondale to Clary Fairchild (Shadowhunters)

"What’s this?
Normally we can’t see Fairy folk controls, they generate a cloaking aura of glamour. But in 1878 a meal chef designed and built these four crystal diopters, can penetrate that effect and reveal the true nature of things."
― Elizabeth "Liz" Sherman (Hellboy II: The Golden Army) explaning to Thomas Manning

The power to perceive the glamour and illusions of paranormal activities through visual sight. Variation of Extrasensory Perception and Enhanced Vision.

Users are able to perceive and see through the glamour and illusions of paranormal activities, a force or effect that fundamentally hides the truth from the natural sight and mundane-reality, seeing all the supernatural things in their world for what they truly appear whether they are invisible or false images.

Only humans with high levels of spirit energy (Bleach) can see spiritual beings.

Due to his unique heritage, Ichigo Kurosaki (Bleach) was born with a large amount of spirit energy, allowing him to see spirits from a young age.

As a quincy, Uryu Ishida (Bleach) was born with above average levels of spirit energy, allowing him to see and interact with spirits. 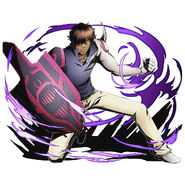 Yasutora Sado/Chad (Bleach) is a fullbringer with significant spiritual energy, allowing him to see spiritual beings.

As half-demons, Rin & Yukio Okumura (Blue Exorcist) can see demons without a Mashō.

Coraline Jones (Coraline 2009) was given the stone by Miriam Forcible and April Spink because she was in "terrible danger" according to them.

Due to possessing a death note, Light Yagami (Death Note) is capable of seeing Shinigami.

Grimm (Grimm) is an individual who can see the true form of Wesen.

...and Hellboy was able to see a bag lady in her true form as Troll through the Goggles.

Due to her spiritual power, Kagome Higurashi (InuYasha) is able to perceive or sense things that are otherwise normally undetectable to ordinary humans, such as ghosts, spirits, and demonic or divine auras.

Stand Users (Jojo's Bizzare Adventure) are the only ones capable of seeing other stands. 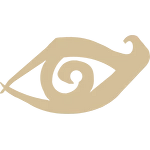 The Voyance rune (Shadowhunters series) is the most basic and permanent rune given to Shadowhunters at a young age, it serves to enhance and focus the Sight, giving the wearer extrasensory perception, allowing the Shadowhunter to see contemporary events beyond their sight, past concealment, such as glamour, and, with training and practice, to identify Downworlders on sight.

The Seeing Stone (The Spiderwick Chronicles) is a stone with a naturally occurring hole running through it. Looking through the hole allows you to see into the Invisible World populated by faeries. Even though any circle-formed opening can give insight to the faerie realm, none is as efficient as a true Seeing Stone…

…Mallory Grace uses the seeing stone to fight against Goblins…

…Then no longer required it after being bestowed The Sight with her brother Simon by Hogsqueal.

As the Te Xuan Ze, Juniper "June" Kim Lee (The Life and Times of Juniper Lee) can see through the magical barrier keeping the worlds of magic and humanity separate.
Community content is available under CC-BY-SA unless otherwise noted.
Advertisement