"Power's all in the costume. Why else would we run around in colored undies?"
― Mermaid Man (SpongeBob SquarePants)

The power to gain strength from clothing. Technique of Cloth Manipulation.

The user is able to gain strength from articles of clothing such as hats, gloves, and shirts. 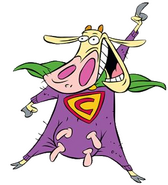 Cow (Cow and Chicken) is imbued with super-strength, flight and the ability to speak Spanish due to the magical properties of her blanky which she wears as a cape.

The Cosplay Pikachu (Pokémon) learns new moves depending on which costume it wears.
Add a photo to this gallery
Retrieved from "https://powerlisting.fandom.com/wiki/Clothing_Empowerment?oldid=1500598"
Community content is available under CC-BY-SA unless otherwise noted.