Monkey (The New Legends Of Monkey) is a powerful God who can summon a cloud to fly on.

Users of this ability can fly, glide and/or levitate through manipulation of clouds. They can fly at varying speeds, levitate, or propel themselves without taking flight, including enhanced jumping by a short burst of flight.

Kaido (One Piece) creates footholds with clouds to move through the air.

Donquixote Doflamingo (One Piece) can use the strings he produces to attach them to clouds, allowing him to travel through the air, giving the appearance he's flying. 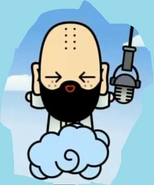 The early Airbenders who lived on the Lion Turtles (Avatar: The Legend of Korra) can manipulate clouds by riding them at varying speeds or propel themselves without taking flight.

Care Bears (Care Bears) on Cloudmobiles.
Add a photo to this gallery
Retrieved from "https://powerlisting.fandom.com/wiki/Cloud_Flight?oldid=1642824"
Community content is available under CC-BY-SA unless otherwise noted.