The power to create clouds. Sub-power of Cloud Manipulation. Variation of Water Generation.

The user can create/generate clouds.

Nami's (One Piece) Clima-Tacts can create clouds artificially by condensing the air around her.

Sherria Blendy (Fairy Tail) can generate a tremendous amount of dark clouds that can kill her targets. 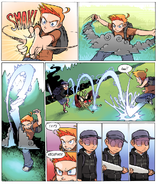 Isaac (Paranatural)
Add a photo to this gallery
Retrieved from "https://powerlisting.fandom.com/wiki/Cloud_Generation?oldid=1772972"
Community content is available under CC-BY-SA unless otherwise noted.