Cloud 9/Abigail Boylen (Marvel Comics) can create multiple clouds of gas and manipulate them for a variety of effects.

User can create, shape and manipulate clouds, visible masses of liquid droplets, various gases and/or frozen crystals produced by the condensation of water vapor that is suspended and sustained by upward-moving air currents in the atmosphere above the surface of a planetary body. 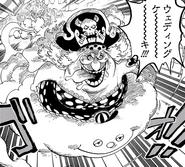 Nami (One Piece) could seize control of Zeus with her fourth Clima Tact and the cloud to strike down her enemies.
Add a photo to this gallery
Retrieved from "https://powerlisting.fandom.com/wiki/Cloud_Manipulation?oldid=1145878"
Community content is available under CC-BY-SA unless otherwise noted.