Use the traits of Cockatrice.

The power to use the abilities of the Cockatrice. Variation of Mythical Avian Physiology and Mythical Bestiary. Not to be confused with Basilisk Physiology.

User with this ability either is or can transform into Cockatrice (Old French cocatris, from medieval Latin calcatrix, a translation of the Greek ichneumon, meaning tracker), essentially a two-legged dragon or serpent-like creature with a cock's head and varying levels of other avian features, such as wings. It has the reputed ability to kill people by either looking at them — "the death-darting eye of Cockatrice" — touching them, or sometimes breathing on them.

For various reasons cockatrice and basilisk have been mistaken and/or combined to each other, causing cockatrice to gain more serpentine appearance and/or various abilities/powers. 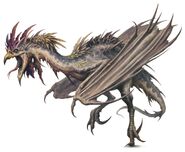 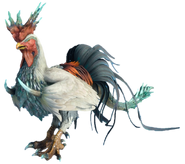 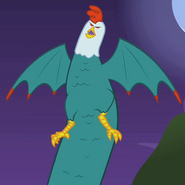 As its name implies, the Guardian ÄRM, Cockatrice (Marchen Awakens Romance) takes the form of a giant bird snake hybrid. 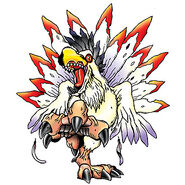 Kokatorimon (Digimon)
Add a photo to this gallery
Retrieved from "https://powerlisting.fandom.com/wiki/Cockatrice_Physiology?oldid=1738930"
Community content is available under CC-BY-SA unless otherwise noted.