Surround oneself in cold.

The ability to surround oneself in cold. Technique of Cold Manipulation. Variation of Ice Aura and Elemental Aura. Opposite to Heat Aura.

The user can release and surround themselves in/with cold for defensive and/or offensive purposes, possibly becoming almost untouchable and granting them various abilities/attacks. The aura may also give the user enhanced physical capabilities such as speed, strength and durability. 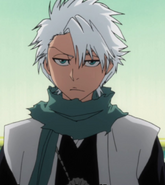 Even as a child, Tōshirō Hitsugaya's (Bleach) uncontrolled power created such a powerful cold aura around him that his grandmother nearly froze to death.

Rukia Kuchiki (Bleach) using her Bankai, Hakka no Togame, which drops her bodily temperature to absolute zero, creating a powerful cold aura that flash-freezes everything within a great vicinity.
Add a photo to this gallery
Retrieved from "https://powerlisting.fandom.com/wiki/Cold_Aura?oldid=1309619"
Community content is available under CC-BY-SA unless otherwise noted.