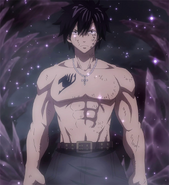 Zernebeth (Pathfinder) has rendered herself immune to cold by way of a layer of cold siccatite infused into her flesh, the same layer that gives her skin a pale blue sheen.
Add a photo to this gallery
Retrieved from "https://powerlisting.fandom.com/wiki/Cold_Immunity?oldid=1065594"
Community content is available under CC-BY-SA unless otherwise noted.