User can create, shape and manipulate colors, attribute of things that results from the light they reflect, transmit, or emit in so far as this light causes a visual sensation that depends on its wavelengths.

Lady Rainicorn (Adventure Time) can alter the color of objects.

Sweet (Buffy the Vampire Slayer) can alter the color of his suit at will.

Color Kid (DC Comics) possessed the ability to change the color of anything. 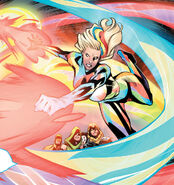 Right/ToQ 1gou and Tokkati/ToQ 2gou (Ressha Sentai ToQger) can change colors to each other with the use Transfer Change by exchanging their miniature Ressha and inserting them into their transformation devices. Their signature weapons change upon transfer.

Inklings (Splatoon) can change the colors of their tentacle "hair" and ink to match the team they are on in multiplayer mode.

Agent 3 (Splatoon) can change the color of their tentacle "hair" and ink depending on the mission they are undertaking in Octo Valley mode...

...and can change the color of the ink that the Octobot King's octomissiles generate from dark fuchsia to orange or yellow by damaging them enough. However...

...DJ Octavio can use the Octobot King's rocket fists to change the octomissiles' ink color back to dark fuchsia.

Callie (Splatoon, left) can change the tinge on the ends of her tentacle "bangs" to match the team she is rooting for during Splatfest.

Octolings (Splatoon) can change the color of their tentacle "hair" from red to black to signify that they have reached elite status and are far tougher than other Octolings.

Prismatic Master (Valkyrie Crusade) can control the seven colors of the rainbow. 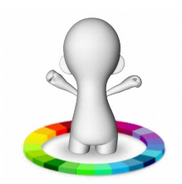 Susan Storm/The Invisible Woman (Marvel Comics) can apply her ability to manipulate the interactions of light waves to seemingly change the color of objects, for example altering her hair color and skin pigment.
Add a photo to this gallery
Retrieved from "https://powerlisting.fandom.com/wiki/Color_Manipulation?oldid=1575152"
Community content is available under CC-BY-SA unless otherwise noted.