Ares/Mars (Greco-Roman Mythology) as the god of war personifies combat as one of his attributes.

Become the embodiment of combat.

The power to become the embodiment of combat. Variation of Power Manifestation and Combat Manipulation.

The users become the concept of combat in all its forms, including mental, physical, spiritual and conceptual ones, regardless of the area and numbers involved, and can control how conflict progress.

Users are extremely skilled in all forms of fighting, weapons, and both strategy and tactics as well as statistics of war to the point where they are considered Gods. 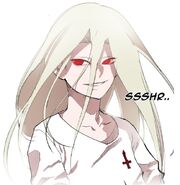 ...eventually becoming one of the State of Qin most battle-thirsty and combat filled generals.

Tyr (Valkyrie Crusade) as the goddess of war, personifies combat as one of his attributes

Sigrun (Valkyrie Crusade) the goddess of battle.
Add a photo to this gallery
Retrieved from "https://powerlisting.fandom.com/wiki/Combat_Embodiment?oldid=1420581"
Community content is available under CC-BY-SA unless otherwise noted.