Reflecting his appearance and his liking for order, Gill (Steet Fighter series) possesses a perfectly balanced elemental control of Pyrokinesis and Cryokinesis.

User can create, shape and manipulate two or more combined forces, allowing them to use either one separately or combine them to one.

God Rugal (Capcom vs. SNK 2) wields the combined forces of his Orochi Power and Akuma's stolen Satsui no Hado. 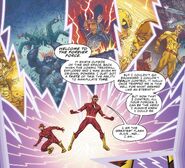 King Cerberus (Devil May Cry 5) is a Devil Arm that wields the combined power of fire, ice, and lightning.

After attaining complete control of the Satsui no Hado and merging it with the Power of Nothingness, Ryu (Street Fighter Unlimited) was able to gain full control over the light and dark aspects of his ki, achieving his true potential and becoming Shin Ryu. In this form, Ryu possessed the power to defeat both Gill and Akuma after he became Oni.
Add a photo to this gallery
Retrieved from "https://powerlisting.fandom.com/wiki/Combined_Force_Manipulation?oldid=1625553"
Community content is available under CC-BY-SA unless otherwise noted.