Seilah (Fairy Tail) can impose overriding commands to other beings via her "Macro" curse.

The power to command other beings.

The user can command other beings by giving them orders to do their bidding no matter what the victim thinks or feels.

Ciel Phantomhive (Black Butler) can command his butler to whatever he says due to their contract.

Fluttershy (My Little Pony series), can get her point across by giving ponies or animals "the stare".

…can command anyone who meets his stare. 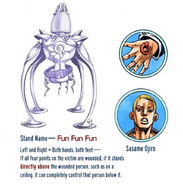 Due to experimentation from when he was a child, Kilgrave (Marvel Cinematic Universe) emits a virus through micro particles in the air that allows him to control those around him verbally.

Those shot by Rogercop (Miraculous: Tales of Ladybug & Cat Noir) are handcuffed and forced to do whatever he commands them to do.

Those who wields the Dark One's Dagger (Once Upon a Time) has full control of the Dark One.

Any living thing that Breed (One Piece) puts a collar on with his Peto Peto no Mi is forced to obey any command he gives them.

Simon Says (Valkyrie Crusade) can force others into obedience to do her biding, and is even capable of affecting those how have resistance to her powers.
Add a photo to this gallery
Retrieved from "https://powerlisting.fandom.com/wiki/Command_Inducement?oldid=1477244"
Community content is available under CC-BY-SA unless otherwise noted.