"So basically and it really gives me the creeps to say this, but...We've got no choice but to fight together side by side, Ou Hon.
Don't say that then just casually saunter your way in front of me, you idiot. Heheh, quit ya bitching!"
― Ri Shin and Ou Hon (Kingdom)

"You never know...This could be the beginning of a beautiful friendship."
― Mystique to James Logan Howlett during their first meeting (Marvel Comics)

The power to form an allegiance willingly or not with one or more companions. Sub-power of Entity Bonding. Lesser form of Subordination Manipulation. Opposite of Adversary Allegiance. 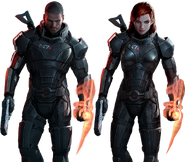 ...and even managing to work together effectively with his archenemy Frieza during the Tournament of Power.

While he already has a strong bond with his brother Sam, Dean Winchester (Supernatural) has managed to form close and powerful bonds with various supernatural creatures over the years...

...becoming best friends with the Angel, Castiel as they fought against the corruption of Heaven...

...forged a bond with Benny Lafitte, a vampire, as they were brothers in arms that survived the horrors of Purgatory...

...and became close allies with the King of Hell, Crowley despite his utter contempt for demons.