Gain powers by hosting a composite being in one’s body.

The power to gain powers by hosting a composite being in one’s body. Variation of Symbiosis.

Hagoromo Ōtsutsuki (Naruto) served as the first host to the Ten-Tails, the combined form of his mother, Kaguya, and the God Tree. 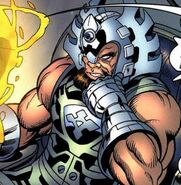 Mega Elementor (Max Steel) is a union of the five primary tormentors who can break apart and recombinate to fight as a more effective unit.

Lexiac/Luthoriac (DCAU) is composed of Brainiac and Lex Luthor with the alien nanotechnology the Dark Heart.
Add a photo to this gallery

Lex Luthor and Brainiac finally become one - Justice League Unlimited
Add a photo to this gallery
Retrieved from "https://powerlisting.fandom.com/wiki/Composite_Symbiosis?oldid=1703012"
Community content is available under CC-BY-SA unless otherwise noted.