Kenshi Masaki (War on Geminar) can take and utilize just about anything he's compacted into handheld form into usable ammunition.

The ability to use compression abilities by using ranged weapons as conduits. Variation of Power Artillery and Compressed Weaponry.

The user can use various ranged weaponry such as slingshots, bows, guns, cannons etc, as a conduit for compressed/powers or impose those effects on ranged weapons to enhance them. 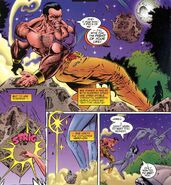 Risque's (Marvel Comics) powers revolve around the gravimetric implosion and rejection of condensed matter.
Add a photo to this gallery
Retrieved from "https://powerlisting.fandom.com/wiki/Compressed_Artillery?oldid=1220773"
Community content is available under CC-BY-SA unless otherwise noted.