Concrete Man (Mega Man 9) truly lives up to his name.

The power to manipulate concrete. A sub-power of Urban Manipulation, variation of Earth Manipulation.

The user can create/generate, shape and manipulate concrete, a composite material composed of coarse granular material (the aggregate or filler) embedded in a hard matrix of material (the cement or binder) that fills the space among the aggregate particles and glues them together.

Syndablokk (Empowered) demonstrates the full potential of this power... 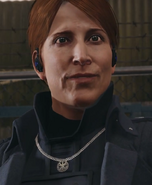 Brooke Augustine (inFamous: Second Son) is an impressively powerful conduit with power over concrete, being able to level an entire interstate bridge with little effort...

...a power she was able to pass on to members of the D.U.P. in small amounts...
DelsinConcreteAbsorb.png
...and later taken by Delson Rowe.
Add a photo to this gallery
Retrieved from "https://powerlisting.fandom.com/wiki/Concrete_Manipulation?oldid=678313"
Community content is available under CC-BY-SA unless otherwise noted.