Be invulnerable under certain conditions.

The power to be invulnerable under certain conditions. Variation of Invulnerability.

The user is able to gain powers of invulnerability under certain conditions, and perhaps other means. As long as those conditions are met, they will remain invulnerable. This can include but is not limited to: mindsets, natural events, time periods, willpower, emotions, and situational qualities.

Warpriest (Destiny) is invulnerable to conventional attacks and can only be harmed with the buff "Brand of the Initiate". 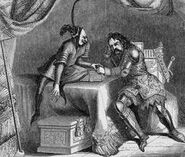 Lord William de Soulis (British Folklore) was granted immunity to mortal weapons and bindings via a deal with Robin Redcap, thus had to be boiled alive in order to truly die.

Because Achilles (Greek Mythology) was bathe in the River Styx, he was known to be an amazing fighter and a near un-killable warrior during battle.
Add a photo to this gallery
Retrieved from "https://powerlisting.fandom.com/wiki/Conditional_Invulnerability?oldid=1760796"
Community content is available under CC-BY-SA unless otherwise noted.