The ability to induce confusion. Sub-power of Confusion Manipulation. Variation of Emotion Inducement and Mental Inducement.

User can cause confusion (temporary interference with the clear working of targets mind) in a person or group of people. Depending of the power of user and/or attack this can cause momentary or longer lasting inability to focus attention, loss of orientation (ability to place oneself correctly in the world by time, location, and/or personal identity), disordered memory (ability to correctly recall previous events or learn new material).

Shinji Hirako (Bleach) using Sakanade to invert Bambietta's vision and hearing, confusing her to the point to causing her vertigo.

Muramasa (Bleach) can cause a Zanpakutō spirit to be confused with his power, causing them to revolt against their Soul Reaper masters.

Kōga Kuchiki (Bleach) completely confusing his opponents by sending his spiritual pressure into them, throwing their perceptions off completely.

Psychics (Psychonauts) can induce confusion in the form of confusion grenades.

Armed with the brains of the psychic children of Whispering Rocks, the Brain Tanks (Psychonauts) are capable of tossing an endless supply of confusion grenades. 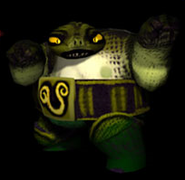 Cobra (Psychonauts) has the ability "Confusion Hood", which can induce confusion. 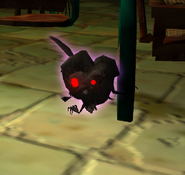 Due to the rich amount of psitanium in the food-chain, the Rats in Thorny Towers (Psychonauts) are able to self-destruct, leaving a cloud of confusion on anybody who is caught in it.