The ability to have awareness for which places are safe to teleport to. Supplementary power of Teleportation and Remote Teleportation. Sub-power of Spatial Perception.

The user possesses an instinctual extrasensory ability that prevents them from materializing all or part of their body within a solid object. They are able to teleport into any place within their teleportational range, whether they have seen it or not, without danger of harming themselves. 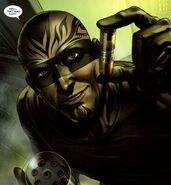 Eden Fesi/Manifold (Marvel Comics)
Add a photo to this gallery
Retrieved from "https://powerlisting.fandom.com/wiki/Conscious_Spatial_Awareness?oldid=1635493"
Community content is available under CC-BY-SA unless otherwise noted.