As a humanoid Cylon, Caprica Six/Number Six (Battlestar Galactica) has her mind transferred into a new body upon death

"Why don't you take my mind? 'Cause you already own my life."
― The Browning - Sick Minds

The power to transfer consciousness between bodies. Sub-power of Telepathy. Not to be confused with Mind Exchange.

The user can transfer the mind/spirit/consciousness of oneself or others into another body. When done on oneself, the user had the potential of retaining all of their powers and skills, which grants them a variation of immortality. Depending on the user, they may have lifeless, empty bodies for their mind to possess, possessing a comatose/brain-dead person, or just possessing someone else.

The Link Unit (Avatar) allows a person to transfer their consciousness into their avatar body.

Ryūzan Hayashi (Gintama) converted his personality into computer data and installed it into No. 502, though data corruption led him to become an emotionless machine, until nearing his death did his humanity resurfaced.

Charles Xavier (Marvel Comics) survived his death by Jean Grey/Phoenix by transferring his consciousness into his brain-dead brother Patrick.

Ultron (Marvel Comics) can transfer his consciousness to another body should his previous one be destroyed.

...Kagerōza Inaba, who inherited most of his memories...

...and Nozomi Kujō, who somehow split off from Inaba's original form...

...which when combined, the original Yushima's personality returns in a much stronger body. 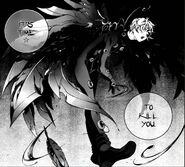 Rinichirō Hagire (Deadman Wonderland) utilized Chan and En's ability to transcribe his memories into another body, effectively taking over and extending his life, with Toto Sakigami being his third and last generation.

Orochimaru (Naruto) using the Living Corpse Reincarnation to permanently transfer his mind to another body, completely taking over it.

Kaguya Ōtsutsuki (Naruto) reawakens within Madara's body when Black Zetsu, her will, took over the body.

Fūka (Naruto) can switch her consciousness between several stored bodies due to her hair housing her soul.

Exploiting Babbo's ability to hold human consciousness, Diana (Marchen Awakens Romance) corrupted him by transferring the evil minds of the Orb into him.

TOM (Toonami) has repeatedly transferred his consciousness into different bodies after the previous ones have been destroyed.

Juniper "June" Kim Lee (The Life and Times of Juniper Lee) using the Orb of Drakaron to transfer Ray-Ray's brain into a new body. 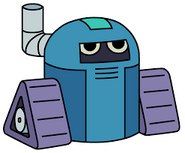 and Mikayla can transfer their consciousness into another body whenever their current one is destroyed.

Through the Dark Side, Sheev Palpatine/Darth Sidious (Star Wars) can transfer his essence into a clone body upon death, or even into another being should they be corrupted enough.

In the event that his physical body would die, the Batman Who Laughs (DC Comics) arranged for his brain and consciousness to be transplanted into the body of the nigh-omnipotent Final Bruce Wayne...

...transforming him into the Darkest Knight.

With his Hoverchair and portable ring, DeVoe (The Flash) can transfer his consciousness into other beings body's taking them over and gaining their powers.

Jake getting his mind transferred at the tree of souls