Lady Styx (DC Comics) is a nightmarish religious plague given physical form who can encroach whole galaxies with her church & faith alone.

The power to physically and mentally warp the core of others. Combination of Overwhelming Influence and Corruption Manipulation.

Users can taint those around them with a physio-psychoactive influence that can bend and alter their very appearance and mindset into whatever the user desires.

This affliction can spread both physically via infection; twisting people, places, and things through basic contact, mentally via taking advantage of emotional or psychological duress and even relational means; either seeking out and passing along through ancestral or hereditary means.

Even in death, those who've died or are slain by the wielder are fair game to their summoning call, able to raise the dead and recently deceased as loyal acolytes serving the users every whim.

Bringing them back stronger than ever before, through this one can even revitalize themselves from beyond the grave using one of their converted vessels as a means of self-resurrection. 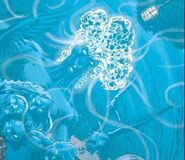