The Sorcerer's (Randy Cunningham: 9th Grade Ninja) Chaos Pearls tainted essence grants him the power to taint others, turning them into monsters and creates enough chaos to escape his prison or use it Stank powers for other usages.

Have your corrupted/corrupting nature link to your powers.

The ability to have one's corrupted/corrupting nature linked to one's powers. Variation of Self Power Link. Opposite to Purified Power Link. Not to be confused with Cursed Power Link.

The user can make their corrupted/corrupted nature connect to their powers and use it to control them. The tainted/tainting aspect fuels the powers and allows them to be strengthened and utilized on various levels.

After fusing with Vlad evil ghost half and being corrupted by it, Dark Danny (Danny Phantom) became the most evil ghost on the planet with powers that give him the ability to corrupt others.

Morgana the Fallen (League of Legends) 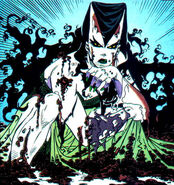 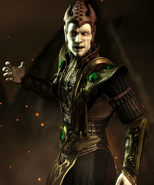 Shinnok (Mortal Kombat)
Add a photo to this gallery
Retrieved from "https://powerlisting.fandom.com/wiki/Corrupted_Power_Link?oldid=1730360"
Community content is available under CC-BY-SA unless otherwise noted.