Elan Morin Tedronai, best known as Ishamael or Moridin (The Wheel of Time) used the corruptive True Power to such a degree that his eyes and mouth glowed brightly as he was driven mad.

The power to use corruption-related magic. Form of Magic. Variation of Corruption Manipulation. Opposite to Purification Magic.

The user is able perform a form of magic that utilizes a form of corruption or tainted nature to a variety of effects.

As Gabriel Belmont (Castlevania: Lords of Shadow) developed his power as Dracula to untold heights using his Cursed Blood, he developed ever increasing levels of corrupting magic through Blood Magic.

After falling to Corruption, Archon Lucien (Darksiders 2) was capable of using it in conjunction with his holy light magic.

Blight (DC Comics) is the manifestation of all human corruption, and is capable of using magic that manipulates that effect.

Eclipso (DC Comics) can use his powers through his connection to the Heart of Darkness diamond to corrupt others with magic, putting them under his sway as "Eclipsed" people.

As the Daedric Prince of Corruption, Molag Bal (The Elder Scrolls) is a master of corrupting others, from his Soul-Shriven to the creation of corrupted dragons, to even the very inception of vampirism itself. 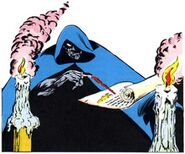 As the inventor of most dark magic, Chthon (Marvel Comics) can influence almost anyone who uses his works, which have created a great many supernatural creatures.

Sith alchemists (Star Wars) use aspects of the Dark Side of the Force to corrupt and manipulate others through arcane rituals far beyond most Force powers.

Malekith (Warhammer), Witch King of the Dark Elves, is a master of Dark Magic, also known as Dhar, a corrupted, polluted form of primal magic power. 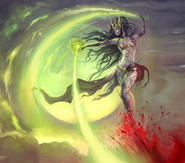 Morathi (Warhammer) the Hag Sorceress is a master practitioner of Dhar, much like her son after her.

Due to his connections to Shadar Logoth, Padan Fain (The Wheel of Time) is capable of a corruptive magic that is unconnected to the Dark One's True Power.

After reincarnating, Ishamael's new form of Moridin (The Wheel of Time) used the True Power extensively and exclusively, corrupting his mind completely to insanity in less than three years.

Rand al'Thor (The Wheel of Time) gained the ability to use the True Power through his connection to Moridin, the reincarnation of Ishamael.
Add a photo to this gallery
Retrieved from "https://powerlisting.fandom.com/wiki/Corruption_Magic?oldid=1512537"
Community content is available under CC-BY-SA unless otherwise noted.