The Blood/Inner Dracula (Castlevania Lords of Shadow 2) the malevolent aspect of Gabriel personified, a living plasma mass that can corrupt anything it afflicts with its blood.

The power to manipulate the powers of corruption and tainted hearts. Sub-power of Morality Manipulation and Malefic Force Manipulation. Opposite to Purification Manipulation.

Even the Heavenly Archon (Darksiders 2) can be corrupted. 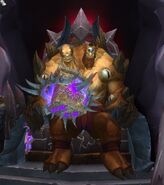 Cho'Gall (Warcraft) is able to use Corruption Powers.

Absalom (Darksiders 2) the first nephalem became the scion and avatar of the corruption born from the rampage across creation perpetrated by his race.

Oryx, The Taken King (Destiny) can convert any sentient being into corrupted versions of themselves called "Taken" hence the title "Taken King".
Community content is available under CC-BY-SA unless otherwise noted.
Advertisement