The Phoenix Force (Marvel Comics) represents the forces of destruction and rebirth. As such, it can use its cosmic flames to incinerate planets with them or use them to bathe a planet in their cosmic radiance and give it new life.

The user can create, shape and manipulate cosmic fire from the depths of deep space, from celestial objects such as from meteors, stars, constellations, planets/planetoids, etc. These flames can burn in space, and thus, have no need of the consumption of oxygen.

Many beings have been hosts to the powerful cosmic entity known as the Phoenix Force, Jean Grey (Marvel Comics) being the most powerful host and wielded its cosmic flames with lethal efficiency...

...Rachel Summers, the mutant daughter of Cyclops and Phoenix of another timeline...

...Other hosts include Amber Hunt... 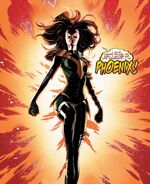