The Tower (The Dark Tower) is the ultimate cosmic keystone as it holds together the entire omniverse.

Become a anchor/keystone for a world, dimension, plane, universe or reality.

"Now listen closely, because this bit is very important. Existence, in all its forms and splendor, functions solely on one principle: God is infallible. To prove Him wrong would undo reality and everything that is. Up would become down, black would become white, existence would become nothingness. In essence, if they are allowed to enter that church, they'll unmake the world."
― Metatron, Dogma

"This, my silent friend, is an Engine. Lovely, isn't it? It's not often you get to see one up close, or at all. The gods themselves would love to get their hands on one of these pretty things. They keep the world turning, quite literally. But they also do other things. You'll see what I mean..."
― Freddy Beaumont/Loki (The Secret World)

"Without the Soul King, Soul Society would fall apart. The King is the cornerstone. Without the cornerstone, the entire structure would crumble. That is simply... the way of this world."
― Kisuke Urahara (Bleach)

The power to become the anchor/keystone for a world, system, dimension, plane, universe or reality.

User becomes the anchor or keystone for an entire world, system, galaxy, dimension, plane, universe or reality. Their existence is necessary for the place to exist, if the user is killed, removed, or forced to leave the location in which they act as a anchor/keystone, the location will either be destroyed or damaged beyond repair unless the keystone is returned.

The Legendary Aquarion (Aquarion Evol) acted as the core of the planet Vega, when it was removed, the world began to experience increasingly worse natural disasters, which threatened to destroy the entire planet.

The Soul King (Bleach) sustains all of reality. Without it (or anyone possessing its power), all the dimensions would collapse on each other.

Grayskull and the Power of Eternia (DC Comics) are the cosmological link to the multiverse said power had created.

The Warring Triad (Final Fantasy VI) act as an anchor for the entire world, and if their ever moved out of their perfect alignment, the world will be torn apart.

Kain (Legacy of Kain) is the Scion of Balance, destined to restore balance to the decaying world of Nosgoth. 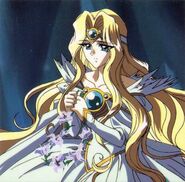 As the Pillar of Cephiro, Princess Emeraude (Magic Knight Rayearth) was both the literal and figurative support for her world.

The Panoptichron (Marvel Comics) is the cornerstone of all realities within the multiverse while observing it from outside space/time.

Ratatosk (Tales of Symphonia: Dawn of a New World)

Lord English (Homestuck) became a keystone in homestuck where everything across paradox space answered him and assured his existence, to the point where everything outside of canon (his control) exists conditionally for him, and failling to meet the requirements of his existence retroactively discredits everything in a conceptual unraveling in which existence forgets everyone and everything. 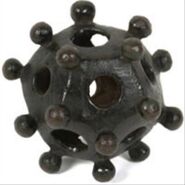 SCP-184 - The Architect (SCP Foundation) is believed to be the source of the entire universe as a whole in the SCP Cosmology due to its nature of expanding and changing the inner dimensions of anything.

SCP-184 - The Architect (SCP Animation)-2
Add a photo to this gallery
Retrieved from "https://powerlisting.fandom.com/wiki/Cosmic_Keystone?oldid=1772746"
Community content is available under CC-BY-SA unless otherwise noted.