The Punishers (Marvel Comics) are deadly assault droids powered by the cosmic energy and maintained by the technology of Galactus.

Use the traits of machine with cosmic powers.

The ability to use the abilities of a machine with cosmic powers. Variation of Bionic Physiology, Prime Being, and Eldritch Machine Physiology.

The user either is or can transform into a machine with cosmic power fueling them. They can come from from beyond the stars, time/space or conceptual grasp of reality.

Victor Stone (DC Comics) had been augmented to his ultimate state by the New God technologies of the Mother Box, turning him into Cyborg 1,000,000.

The Thought Robot (DC Comics) is a powered armor of celestial proportions created by the Monitors to combat the evil Dark Monitor; Mandrakk. 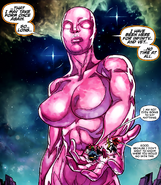 After having merged with the Panoptichron, Sage (Marvel Comics) now acts as the machines living thinking mind.
Add a photo to this gallery
Retrieved from "https://powerlisting.fandom.com/wiki/Cosmological_Machine_Physiology?oldid=1392930"
Community content is available under CC-BY-SA unless otherwise noted.