Äs Nodt (Bleach) uses the power of "Tataforas" to induce 'Fear' into his enemies by them just looking at him.

Have a face/appearance/true form that causes various effect to whoever sees it.

"You sure are a lot prettier than the last reaper I saw."
"You saw my true form and flipped out. It kinda hurts a girl's feelings."
― Dean Winchester and Tessa the Reaper (Supernatural)

The ability to have a face/appearance/true form that causes various effect to whoever sees it. Not to be confused with Ocular Techniques.

Users face/appearance/true form that causes various effect to whoever sees it. 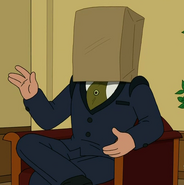 Langdon Cobb (Futurama) is a Quantum lichen, an alien species that feed on attention. Those who see his face directly however, even in a photograph, will cause the observer's life force to be sucked out, which is then stored inside the QL's ego.

Diarmuid Ua Duibhne's (Fate/stay night) Love Spot will cause any woman who gazes upon it to fall instanstly in love with him.
Add a photo to this gallery
Retrieved from "https://powerlisting.fandom.com/wiki/Countenance?oldid=1425863"
Community content is available under CC-BY-SA unless otherwise noted.