Use the traits of a creator deity.

"The Creator had made the world and then left humankind to make of it what they would, a heaven or the Pit of Doom by their choosing, The Creator had made many worlds, watched each flower and die, and gone on to make endless worlds beyond. A gardener did not weep for each blossom that fell."
― Explanation of the Creator's role (Wheel of Time)

User with this ability either is or can transform into a Creator Deity, the creator of planets, solar systems, cosmoses, universes, and/or even the Multiverse/Omniverse. This power allows one to create anything on a divine level rather than rule it; and, it should not be confused with a Monotheistic Deity Physiology, which is the Supreme Being of all of Creation.

God (Abrahamic religions) the creator of all.

Kaioshins (Dragon Ball) are the gods who create planets and life.

God (Star Maker) Created all of existence, which includes an infinite hierarchy of cosmos and an infinite number of higher dimensions. Shaped and predates very concept of Dimensions, Space-Time and Metaphysics of which is part of the absolute totality.

Le Papillon (Grindhouse and Watercolors), Divine Father of Flowers, Mother of Stars, the Transcendental Butterfly and creator of the universe.

Arceus (Pokémon) is the creator deity of the Pokémon multiverse.

The God of Light (RWBY) created the forces of life, such as water, plants and wildlife. 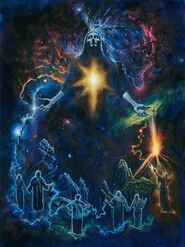 Eru Ilúvatar (Lord of the Rings)

Chip (Sonic Unleashed) is an ancient, primordial deity and the incarnation of light, day and rebirth, existing as part of a cycle to recreate the world when its counterpart Dark Gaia destroys it. 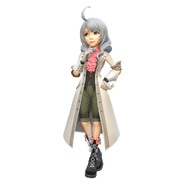 Enna Kros (World of Final Fantasy) is the creator deity of multiple worlds, including Grymoire.