User becomes stronger, faster, more durable, etc. when they are near, come in contact with, or have crests/sigils, possibly to unlock abilities related to what the crest is based on and enhancing their existing powers. Some users may be able to draw sustenance from crests/sigils or even slow or stop aging.

Unlike tattoos, crests are considered to be part of the body (like birthmarks), while tattoos have to be physically added to the body instead.

Firebrand (Demons Crest) gained ultimate power after combining the power of his flame crest with the five other crests of power, eventually transforming him into the Ultimate Gargoyle. 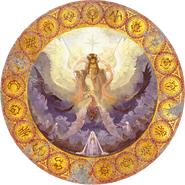 Crest Bearers (Fire Emblem Three Houses) can harness the power of their Crests to give an edge in combat
Add a photo to this gallery
Retrieved from "https://powerlisting.fandom.com/wiki/Crest_Empowerment?oldid=1428774"
Community content is available under CC-BY-SA unless otherwise noted.