Son Goku (Dragon Ball series) strikes Frieza with a strong Heavy Finish as part of his Meteor Smash, sending him trembling in pain.

"He only had two punches that made contact... Then why am I s-so damaged?!"
― Cell after getting hit by Gohan's Soaring Dragon Strike. (Dragon Ball series)

The ability to deal crippling attacks to opponents. Combination of Weakness Detection and Enhanced Combat.

The user is able to deal extremely damaging attacks to the enemy dealing double the damage or causing very lethal pain or fatal wounds. This can be done with an effective or a precise strike to an opponent's body, or with a special ability that happens to be the enemy's weakness. Highly advanced users can take down their opponent in one attack.

...to deliver a critical blow to Nappa, breaking his back and permanently crippling him...

...and used Miracle Blow to punch through Broly's stomach, reopening his childhood wound and dealing a critical blow onto him, physically and mentally.

After tiring out Vegeta during their fight, Android 18 (Dragon Ball series) was able to break his arm, greatly impeding his fighting abilities.

Son Gohan (Dragon Ball series) uses the Soaring Dragon Strike to deliver a sharp hook punch to the Cell's stomach before follows up with a swift uppercut to his chin, sending Cell reeling back and severely injuring him...

...and was also able to deliver a powerful kick to his body, not only greatly injuring Cell, but also have him eventually regurgitate Android 18 and revert back to his Semi-Perfect form.

Oboro (Gintama) infusing his ki into his Hakkei strike to deal a critical blow to Gintoki's meridian.

...and later finishes off 'The World.

During his first fight with Yusuke and Kuwabara, Younger Toguro (Yu Yu Hakusho) was able to land a critical blow to Kuwabara, causing him to cough blood and slamming him into a wall...

...and with his 100% power, he dealt a critical blow to Yusuke's arm and leaving him writhing in pain. 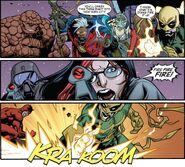 Channeling his chi into his hands, Danny Rand/Iron Fist (Marvel Comics) can deal crippling blows to his opponents and structures...

Using the Sato-oshi Strike, Shredder (Batman vs. Teenage Mutant Ninja Turtles) deals a critical body blow to Batman, sending him flying back and leaving him bleeding from the mouth.

Like many characters, Yoshimitsu (Soul series) can deliver attacks that critically damage his opponents.

With his Critical Impact fighting style, Terra (Kingdom Hearts series) can utilize the Zantetsuken technique to perform an impossibly fast strike that deals a devastating amount of damage.

Kain (Legacy of Kain) deals a single critical strike to an opponent by using the Fury Dark Gift.

X and Zero (Mega Man X series) can use their Special Weapons to expose their opponent's weakness and deal with great damage to them.

Mario (Super Mario) can use Timed Hits to deal significantly more damage to an enemy than with a normal hit.

Kazuya Mishima (Tekken) deals a critical blow directly to Heihachi's chest, stopping his heart and killing him.
Community content is available under CC-BY-SA unless otherwise noted.