Use the traits of crocotta.

The power to use the abilities of crocotta. Variation of Mythical Bestiary.

User with this ability either is or can transform into crocotta (also corocotta, crocuta, leucrocotta, or yena), a mythical hybrid being of India or Ethiopia, usually described as combination between dog and wolf or between hyena and lion, or as a fantastic creature with the body of a stag, a lion's neck, cloven hooves. Regardless of their other attribute, they always have a wide mouth with a sharp, bony ridge in place of teeth.

Crocotta has the ability to imitate the voices of men to lure prey and described as having amazing strength, be as brave as a lion, as swift as a horse, and as strong as a bull and they cannot be overcome by any weapon of steel.

A Crocotta (Supernatural) eating a soul.

A Crocotta as illustrated in a medieval bestiary. 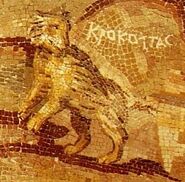 A Crocotta as depicted in a mosaic.
Add a photo to this gallery
Retrieved from "https://powerlisting.fandom.com/wiki/Crocotta_Physiology?oldid=1607628"
Community content is available under CC-BY-SA unless otherwise noted.