Klaus (Kekkai Sensen) uses his ability "Brain Grid Blood Battle Style" to create crosses out of his own blood.

The ability to use crosses as weapons. Sub-power of Cross Manipulation. Variation of Improbable Weapon Proficiency.

Users are able to demonstrate unique aptitude for using crosses in combat, using them in various ways to cause harm. Some users may be able to create their crosses from holy/divine energy/elements or may use physical ones.

Dante (Dante's Inferno) defeating Luicfer using the holy cross to reseal him in his prison. 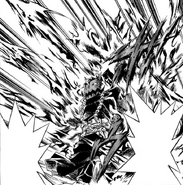 The cross chained to Halloween’s (Marchen Awakens Romance) back can shoot fiery missiles and incinerate the enemy.
Add a photo to this gallery
Retrieved from "https://powerlisting.fandom.com/wiki/Cross_Combat?oldid=1501013"
Community content is available under CC-BY-SA unless otherwise noted.