Construct bladed weapons out of ice.

Users can construct bladed weapons of various shapes and sizes out of ice. They able to manipulate the blade, making it extremely sharp, allowing them to freeze surrounding area or unleashing shards of ice that are capable of penetrating anything.

Nami Kusunoki (Alive: The Final Evolution) forming claw blades out of ice that she can use in conjunction with her martial arts and fire off as bullets.

Rukia Kuchiki (Bleach) forming a blade out of ice from the broken part of her sword. 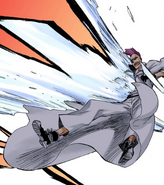 Gabriel Belmont/Dracula (Castlevania: Lords of Shadow) forming the Void Sword, an icy blade that represents the cold, dark void in his heart.

Kirby (Kirby series) can combine the Ice and Sword Copy Abilities to create the Ice Sword.

Kirby (Kirby series) can add the Blizzard Power Effect from Chilly to the Sword Copy Ability to create the Blizzard Sword.

Girom (Marchen Awakens Romance) is able to construct blades out of the ice created from his ÄRM, Iced Earth. He used this to cruelly kill his War Games teammate Aqua after she lost her battle against Nanashi. 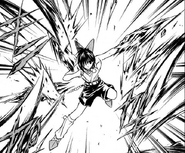 Snow’s (Marchen Awakens Romance) ÄRM Ice Ring freezes the water molecules around her hand to form a blade made of ice.

Haku (Naruto) using Certain-Kill Ice Spears to destroy his own cottage and kill his pursuers in self-defense.

Kuzan/Aokiji (One Piece) can create tridents of ice with his Ice Block: Partisan technique...

In her Ice King mode, Yumi (Senran Kagura) creates a sword of ice.

Tōya (Yu Yu Hakusho) can use his ability over ice to freeze water molecules around his arm, forming his Cursed Ice Blade.

Raven Branwen (RWBY) creates a sword out of ice.

Eugeo (Sword Art Online) wields the Blue Rose Sword that was created from an eternal block of ice.

Frostbite (Danny Phantom) can shape his ice objects and turn it into ice weapons like a sword that can cleanly and effortless slice through anything.

Metarex Crystal (Sonic X)
Add a photo to this gallery
Retrieved from "https://powerlisting.fandom.com/wiki/Cryokinetic_Blade_Construction?oldid=1680528"
Community content is available under CC-BY-SA unless otherwise noted.