Create creatures made out of ice.

The power to create creatures out of ice or shape it into certain shapes. Sub-power of Ice Attacks and Cryokinetic Constructs. Variation of Hydrokinetic Creature Creation.

User is able to create beings of ice or shape existing ice into wanted shapes and purposes. They can grant the beings varying levels of independence (controlled, automatons/programmed, semi-independent) and existence (momentary to permanent) and delete the creature once they are done with them.

Yuki-Onna (Nioh) creating an ice butterfly with her breath.

Kuzan (One Piece) can use his Hie Hie no Mi to create a giant bird made of ice.

A Snow Dancer (Sailor Moon S: the Movie) is a minion created by the Ice Witch in order to freeze the entire earth. 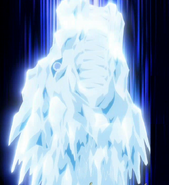 Furigaro and Gerhart (Zatch Bell!) using their strongest spell, Ragikoru Fangu to create a giant wolf made of ice.
Add a photo to this gallery
Retrieved from "https://powerlisting.fandom.com/wiki/Cryokinetic_Creature_Creation?oldid=1378034"
Community content is available under CC-BY-SA unless otherwise noted.