"A diamond fist that can pound this entire world to dust."
― Kreig (One Piece)

The ability to release/use crystals to various attacks. Sub-power of Crystal Manipulation. Variation of Earth Attacks. Opposite to Crystal Defense.

The user can release/use crystals to attacks of various shapes and/or intensities, either projected, used as a part of melee attacks, etc. 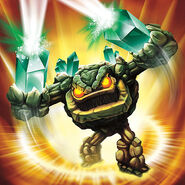 Asterisk (Valkyrie Crusade) can manipulate crystals, and uses them to attack others.

With Nicole to assist her as her spell bookkeeper, Cherish's (Zatch Bell!) spells all use the power of crystals to attack her opponents.

Yumehara Nozomi/Cure Dream (Yes! Pretty Cure 5) attacks with the power of crystals with Crystal Shoot.
Add a photo to this gallery
Retrieved from "https://powerlisting.fandom.com/wiki/Crystal_Attacks?oldid=1773014"
Community content is available under CC-BY-SA unless otherwise noted.