Cherish and Nicole (Zatch Bell!) can create a giant crystal ball with their Dioga Kofarudon spell.

The power to create and project balls of crystals. Sub-power of Crystal Attacks. Variation of Earth Ball Projection.

The user can create and fire balls of crystals ranging from small to large sizes making quite the impact and may even be more powerful than Earth Ball Projection if user uses diamonds or certain crystals. Some users can make their spheres shatter by causing many small sharp crystals to fall upon impact. 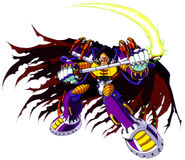 Add a photo to this gallery
Retrieved from "https://powerlisting.fandom.com/wiki/Crystal_Ball_Projection?oldid=1021155"
Community content is available under CC-BY-SA unless otherwise noted.