Annie Leonhart/the Female Titan (Attack on Titan) can infuse her body with crystal for both offensive and defensive purposes.

The power to infuse crystals into objects (usually a weapon), beings, or powers. Sub-power of Crystal Attacks. Variation of Earth Infusion.

The user is able to infuse objects (usually a weapon), beings, or powers with crystals and crystalline materials, empowering and energizing them and allowing the user to manipulate their qualities and efficiency. 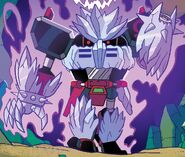 E-123 Omega (Archie's Sonic the Hedgehog) has been infused with crystal by the Naugus Twins, turning him into Crystal Omega.

The Naugus Twins (Archie's Sonic the Hedgehog) have infused Metal Sonic with crystals, turning him into Crystal Sonic.

Inuyasha (InuYasha) can create the Diamond Tessaiga, allowing him to give his Tessaiga the appearance of a diamond blade and project spears of adamant splinters.

Hazel Rainart (RWBY) infuses multiple raw Dust crystals into his body to enhance his attacks.
Add a photo to this gallery
Retrieved from "https://powerlisting.fandom.com/wiki/Crystal_Infusion?oldid=1710468"
Community content is available under CC-BY-SA unless otherwise noted.