Akame (Akame Ga Kill!) wielding the Murasame, which injects a lethal cursed poison into any living being if so much as a nick is made, no resistance nor antidote possible.

The ability to combine slashing attacks with curse effects/forces. Sub-power of Cursed Attacks. A combination of Curse Inducement and Cutting. Variation of Slash Effect. Opposite to Blessed Slash.

User can combine curse effects/forces to attacks with bladed weapons.

Lancer's (Fate/Zero) lance Gae Buidhe can inflict a curse on whomever is struck to never heal from its wounds until the lance is broken.

Sectumsempra (Harry Potter) is a spell that causes a cursed slash. 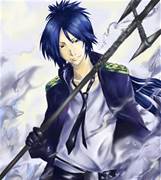 Anyone stabbed by Mukuro's (Katekyo Hitman Reborn) spear can potentially become possessed by him. 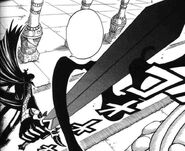 Doryu's (Rave Master) jet black sword is magical in nature. Any wounds caused by it will not heal naturally. The only way to cure it is to "enter the light".

Cursed Twin Blades of Vengeance (Nicklodion’s Teenage Mutant Ninja Turtles 2012 Series) curse anyone cut by them with fatal misfortune.
Add a photo to this gallery
Retrieved from "https://powerlisting.fandom.com/wiki/Cursed_Slash?oldid=1501087"
Community content is available under CC-BY-SA unless otherwise noted.