Chisame Hasegawa (Negima!) can use her Pactio to transport others into cyberspace and manipulate its aspects.

The power to utilize cyberspace-related magic. Variation of Cyberspace Manipulation and Environmental Magic.

The user can perform a form of magic related to the cyberspace, allowing for magical control over cyberspace and/or its aspects and/or drawing on its mystical energies.

Cosmo and Wanda (The Fairly Oddparents) cast magic to allow Timmy to travel through cyberspace. 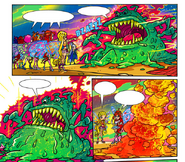 Winx and Trix (Winx Club) use magic to enter cyberspace and destroy a magical virus.
Add a photo to this gallery
Retrieved from "https://powerlisting.fandom.com/wiki/Cyberspace_Magic?oldid=1501103"
Community content is available under CC-BY-SA unless otherwise noted.