Red Tornado (DC Comics) is adept at this ability.

Spin in a cyclonic manner.
The power to spin in a tornado-like manner.

The user can spin like a tornado for both offensive and defensive purposes. 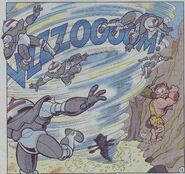 Superman (Batman Beyond) rapidly spinning to throw Inque off of him.

Super Buu (Dragon Ball) twisting his own body like a windup screw to propel himself. 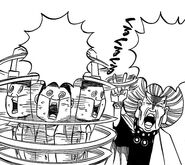 Ooba (Fairy Tail) can spin anything.

Wukong, the Monkey King (League of Legends) is about to use his Cyclone ability.

Link (The Legend of Zelda) using his Spin Attack.

Jay (Lego Ninjago: Masters of Spinjitzu) performing Spinjitzu, a form of cyclone spinning. Spinjitzu involves the user tapping into their innate elemental energies while spinning rapidly, creating a tornado-like vortex of energy around themselves. 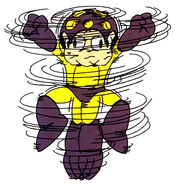 Buffalo (One Piece) spinning himself at high speed to launch Baby 5 as a missile. 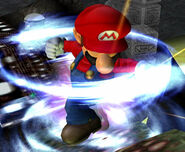 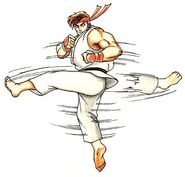 ...and the Shin Tatsumaki Senpukyaku.

Before gaining his wings, Joshua's (The Young Guardians) method of the flight was producing wind cyclones.

When his bookkeeper, Galliont, casts Garu Yuruk, Zabas (Zatch Bell!) can spiral towards his opponents at incredible speed while using his wing armor to deal extra damage.

Dark Daxter (Jak and Daxter) in his Frenzy Mode.

Vlad's (Danny Phantom) most powerful tequice is his Ghost Tornado which deflects any ectoplasmic energy and causing huge wind gusts.