The power to analyze DNA. Technique of DNA Manipulation. Sub-power of Scanning. 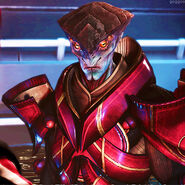 Javik (Mass Effect) was able to sense and identify Grunt's DNA in the room where his tank was opened on the Normandy.
Add a photo to this gallery
Retrieved from "https://powerlisting.fandom.com/wiki/DNA_Analysis?oldid=1501677"
Community content is available under CC-BY-SA unless otherwise noted.