Blaine (Pokémon Adventures) used his own DNA to create Mewtwo, linking the two and allowing them to sense each other's presence.

Be linked by DNA.

The power to be linked by one's own DNA to another's. Sub-power of DNA Manipulation. Variation of Symbiotic Connection.

User possesses a link to somebody/something through their DNA, which allows them to know each other's locations, share in other power(s) or other capabilities. 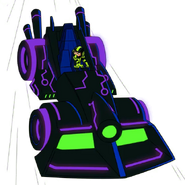 In his go-kart form, Glitch (Ben 10: Reboot) can link to the DNA samples in the Omnitrix...

...assuming forms based on the Omnitrix aliens themselves.

As a clone of Supergirl, Galatea (Justice League Unlimited) shares a psychic link to her, allowing Supergirl to experience Galatea's training and missions in the form of dreams.
Add a photo to this gallery
Retrieved from "https://powerlisting.fandom.com/wiki/DNA_Link?oldid=1501681"
Community content is available under CC-BY-SA unless otherwise noted.