Mimic Greek Daimons and their abilities.

Power to use the traits and powers of Greek Daemons. Variation of Greek Deity Physiology and a form of Transcendent Physiology. 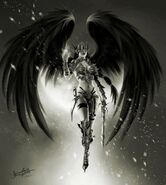 According to Olympian Myths nymphs are consider lesser goddess and the daughters of Zeus.
Add a photo to this gallery
Retrieved from "https://powerlisting.fandom.com/wiki/Daemon_Physiology?oldid=1623706"
Community content is available under CC-BY-SA unless otherwise noted.