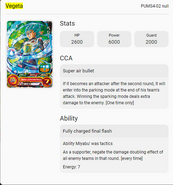 Vegeta (Dragon Ball Heroes) negates all the damage induced by the doubling effect made by the opposition.
Add a photo to this gallery
Retrieved from "https://powerlisting.fandom.com/wiki/Damage_Negation?oldid=1595524"
Community content is available under CC-BY-SA unless otherwise noted.