The Ghost Rider's (Marvel Comics) can condemn others in a hellish state of torment via The Penance Stare.

The ability to enforce hellish punishment. Sub-power of Demonic Force Manipulation. Variation of Punishment. Opposite of Salvation.

Users can condemn others to a spiritual and hellish state of eternal punishment where they are forever doomed to be tormented by demonic forces and defilement for their sins and transgressions.

Ai Enma (Hell Girl) operates by making deals with clients and then sending a victim of their choosing to Hell...

...at the cost of the client themselves being damned to Hell upon their death. 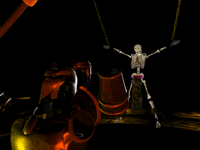 As punishment for failing to protect the Circle of Nine from Vorador, Malek (Legacy of Kain) was damned by Mortanius, his soul ripped from his body and bound to his armor for eternity.

Due to his reckless use of Horcruxes, Voldemort's (Harry Potter) mutilated soul was damned to be forever trapped in Limbo, unable to pass on to the afterlife or return as a ghost, a fate worse than death itself.

As a result of a deal with a Crossroad demon, Dean Winchester (Supernatural) was damned to Hell.
Add a photo to this gallery
Retrieved from "https://powerlisting.fandom.com/wiki/Damnation?oldid=1695713"
Community content is available under CC-BY-SA unless otherwise noted.